BNETDocs has been going through quite a few changes lately. I figured it was time for another status update. This is a follow-up news post to the previous status update.

A quick summary is the plot is thickening around Blizzard development and a few big milestones are soon to come for both BNETDocs and Blizzard.

This of course spiked an interest from the folks who browse Reddit at Blizzard. I have strong evidence that they've been observing our documentation around game matchmaking and friends on Battle.net, even visiting BNETDocs in their browser without a referring website, multiple times per week.

Worth sharing is this YouTube video from Robert Bridenbecker on WC3 patch 1.27, where he makes note of how his new Classic Games team is working on improving matchmaking and friend integration. 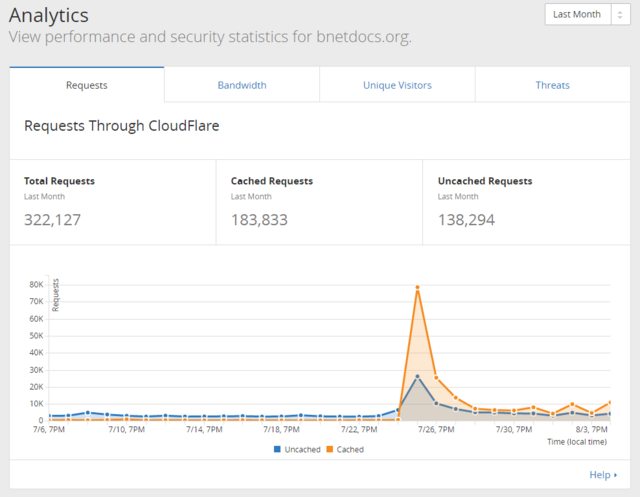 Both environments sport CloudFlare DNS & CDN and are using the same data sources with one exception: Memcache. So there should almost always be a one-to-one clone or feel to both of them, however differing Memcache key stores means that Anti-CSRF tokens and user sessions/logins are stored independently. This means that when you login to production, you will not be logged in on dev, or vice versa, and submitting a form from one environment to the other is also prevented due to the differing Anti-CSRF tokens.

At the request of a few individuals of the BNETDocs community, I have spent time polishing the mobile site for BNETDocs and the Markdown CSS code. The result is now the entire site can benefit from better Markdown, like this news post, and users on mobile will have a much cleaner experience–including a navigation menu, which was previously missing!

This is just a general reminder that the speed of BNETDocs development is at the pace of myself. There are some individuals watching the development of this site, but aren't actively contributing. Unfortunately, while I do love to contribute to BNETDocs, I cannot spend 100% of my time on it, since I do have a full-time job and life is going on around me. That said, I do wish to hopefully be ahead of the game before the rumored StarCraft HD update in September.

Since the last status update, the following features have been completed or partially completed:

The following features still need to be implemented:

Most of the enhancements above and more are currently being tracked on GitHub.

After last being updated November 1, 2012, I have finally released another update for Maelstrom CD-Key Tester on August 2, 2016. After being in development for roughly the last 2 months it has been improved in a number of ways. From a few new major additions to improvements in speed and performance.

Some of the major changes introduced in version 4.0 are:

Maelstrom started in August 2010 at the request of a few of my friends who wanted a better key tester than what was currently available. From there it became a popular tool of choice over the years. One such useful feature that people really like is its ability to test expansion keys.

It can be downloaded here: http://files.codespeak.org/projects/maelstrom/Maelstrom.zip

Blizzard has uploaded a copy of their new patch for StarCraft and StarCraft: Brood War version 1.17.0. It is currently not active on Battle.net servers (connecting using 1.17.0 displays an unsupported version error message), however it can be downloaded from their FTP site. It contains the new version byte 0xD5, a bump from 0xD3 as seen on 1.16.1. The patch was first reported at tieba.baidu.com on July 22 and at teamliquid.net on July 25.

Dumps of the game version handshake can be found on PvPGN's GitHub.

Blizzard Entertainment is suing Bossland, the maker of the popular Overwatch cheat tool "Watchover Tyrant" and several other game cheats. Among other things, the developer accuses the German company of various forms of copyright infringement and unfair competition.

Most recently the company released the new first-person shooter “Overwatch,” which became an instant bestseller. The game received rave reviews and generated hundreds of millions of dollars in revenue during its first weeks on sale.

While most Overwatch players stick to the rules, there’s also a small group that tries to game the system. By using cheats such as the Watchover Tyrant, they play with an advantage over regular users.

Blizzard is not happy with the Overwatch cheat and has filed a lawsuit against the German maker, Bossland GMBH, at a federal court in California. Bossland also sells cheats for various other titles such as World of Warcraft, Diablo 3 and Heroes of the Storm, which are mentioned in the complaint as well.

According to Blizzard these bots and cheats also cause millions of dollars in lost sales, as they ruin the games for many legitimate players.

“Defendants’ sale and distribution of the Bossland Hacks in the United States has caused Blizzard to lose millions or tens of millions of dollars in revenue, and to suffer irreparable damage to its goodwill and reputation.”

“Moreover, by releasing ‘Overwatch Cheat’ just days after the release of ‘Overwatch,’ Defendants are attempting to destroy or irreparably harm that game before it even has had a chance to fully flourish.”

The Overwatch cheat has already become relatively popular in a short period of time. Thousands of players are reportedly using the tool, which enables them to display the locations and health status of hidden or obscured opponents.

Blizzard believes that by developing the cheats, Bossland has infringed on its copyrights in various ways. Among other things, the complaint accuses the German cheat maker of contributory copyright infringement.

“They have done so by enabling and encouraging third-party ‘freelancers’ or contractors to fraudulently obtain access to the Blizzard Games and then, having done so, to engage in unauthorized reproduction of the Blizzard Games,” the complaint reads.

Blizzard notes that it has already taken action against thousands of cheaters. In response, Bossland announced that they would make their tool harder to be detected, which suggests that they intentionally violate the game’s EULA.

The game developer adds that the various cheats and bots may have generated millions in revenue for the German company, and demands compensation for its losses.

“Defendants not only know that their conduct is unlawful, but they engage in that conduct with the deliberate intent to harm Blizzard and its business. Blizzard is entitled to monetary damages, injunctive and other equitable relief, and punitive damages against Defendants,” the complaint reads.

Aside from the Overwatch cheat, the current case is very similar to one filed against a freelancer who works for Bossland. This case never really took off and was dismissed earlier this year.

TF spoke with Bossland CEO Zwetan Letschew, who informed us that his company hasn’t received the complaint at its office yet. However, they are no stranger to Blizzard’s legal actions.

“There are over 10 ongoing legal battles in Germany already,” Letschew says, noting that it’s strange that Blizzard decided to take action in the US after all these years.

“Now Blizzard wants to try it in the US too. One could ask himself, why now and not back in 2011. Why did Rod Rigole [Blizzard Deputy General Counsel] even bother to fly to Munich and drive with two other lawyers 380 km to Zwickau. Why not just sue us in the US five years ago?”

While Letschew still isn’t convinced that the lawsuit is even real, he doesn’t fear any legal action in the U.S. According to the CEO, a California court has no jurisdiction over his company, as it has no ties with the United States.

In addition, he is supported by a lawsuit his company won in Germany against Blizzard earlier this year. In that case, which dealt with the Heroes of the Storm bot, Blizzard was ordered to pay Bossland’s legal costs and attorney fees.

The full complaint filed at the Central District Court of California is available here (pdf).

You can view the original TorrentFreak article here.

Figured it was time for a general status update of BNETDocs.

What's left to do:

I don't have any milestones for this site, so I can't give you a timeline of when I plan to complete features. I have a full-time job, 9-5 weekdays, plus I like to have leisure time spent playing games or hanging out with friends, rather than spending time coding. In other words, this site isn't my priority. I will always try to donate my time when I can or when I feel like it, though. I haven't abandoned this project. :-)